An unusual encounter with Craig Childs 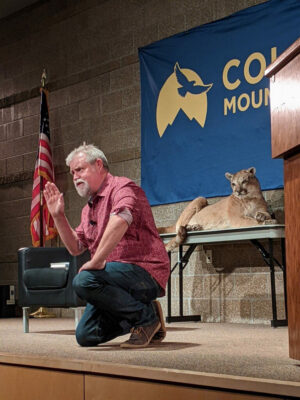 “The Animal Dialogues” is Colorado Mountain College’s 2022 Common Reader’s Choice. Author Craig Childs, here at CMC Rifle on March 22, will give a free talk at SteamPlant at noon on March 29. The public is invited and encouraged to attend.

This is part of a series of CMC Common Reader Author Lectures; Childs is visiting four other CMC campuses this week and will give a total of eight talks by the end of the month. The noted and award-winning nature writer (The Atlantic, The New York Times, more), is a compelling storyteller and fascinating observer of animals in the wild. His book is a collection of short stories based on encounters he has had with a wide range of creatures, from mosquitoes to sharks, bighorn sheep to cougars and many more.

Viewers don’t need to have read the book for Craig to recount his adventures.

According to Childs, crows are superior to humans — and all other creatures. That’s how these large, intelligent and sometimes noisy black birds perceive it anyway.

Childs writes of many profound encounters he has had around the world with crows and dozens of other animals, from mosquitoes to jaguars to bighorn sheep, in “The Animal Dialogues: Uncommon Encounters in the Wild “.

About the CMC Common Reader program

Every year since 2007, a committee of CMC faculty and staff selects a book to read with students and community members. In addition to a Common Reader art and creative writing contest, CMC faculty members develop lesson plans around the book, and the college invites the author to CMC campuses for live lectures. 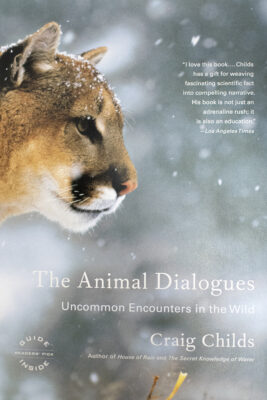 Childs has extensive experience in the Southwest and beyond. He is from Arizona and now lives in Colorado. He began his life of investigation and adventure at the age of 12, chasing a bear through the forest with a camera. As a teenager, he worked for what he calls a “night flying canoe team” doing trips on the Yampa, Gunnison, and Colorado rivers.

Since then, Childs’ life has settled into the desert southwest interspersed with venturing much further afield. He holds a bachelor’s degree in journalism with a minor in women’s studies from CU Boulder and a master’s degree in desert studies from Prescott College. A river guide, faculty member, natural history instructor, adventurer, and writer, Childs is the author of more than a dozen books on human migration, wilderness, archaeology, nature, and animals. wild.

He won the Orion Book Award and twice won the Sigurd F. Olson Nature Writing Award, the Galen Rowell Art of Adventure Award, and the Spirit of the West Award. His writing has appeared in The New York Times, Outside, and High Country News, among others, and he is a commentator on the morning edition of NPR.

Each chapter of “The Animal Dialogues” is a complete, self-contained story of one of Childs’ encounters. According to the author, the book is intended to be read slowly, in the order desired by the reader.

Childs emphasizes that his goal is not to befriend the wild animals he encounters. They could be friends, but then again, they couldn’t. Besides, it’s better if his subjects don’t see him at all.

“I see them,” he said. “Sometimes they see me, but it’s better if they don’t see me. What I really want to be is invisible. I don’t want to be part of their story. If, for example, a cougar sees me, the spell is broken.

This desire to be invisible, even though Childs’ book has the words “dialogue” and “encounter” in its title, is what sets him apart from those like the infamous bear enthusiast Timothy Treadwell who was attacked and killed. in Alaska in 2003 after creating a camp in the heart of bear territory. Treadwell was known to get extremely close to bears, sometimes even playing with cubs.

“His story could eventually become mythical,” Childs said. “He was the man who became a bear. He wasn’t satisfied watching a bear out there do his thing. He wanted to be part of the bear story.

Childs said he was aware that reading “Animal Dialogues” might inspire some to search for wild animals and make the encounters he had. However, the days of chasing bears with cameras are over. He knows the dangers and he says he determines the margin of error to determine the risk he is willing to take. Some less experienced may not.

“Years ago I hadn’t thought of writing disclaimers,” he said, “and that can mean something tragic can happen on many levels. Now I’m at least trying to preface my behavior.

Childs said he only needs a chair and a “mic” at his upcoming author conferences. There will be stories, and maybe Q&As. In the meantime, he has a suggestion.

“Open the door and get out,” he said. “Sometimes we forget the box we are in. Don’t forget to open the door.

Editor’s Note: CMC says it’s grateful to partner with the City of Salida and the Salida SteamPlant Event Center in bringing author Craig Childs to Salida. Additionally, local photographers Ryan Kempfer and Chris Kassar of Elk Raven Photography will exhibit some of their photography at the event.

To visit coloradomtn.edu/common-reader for more details and information