At 6 o’clock in the morning, it is still very dark when I reach the Denwa river. Dawn is breaking a little reluctantly, and the only sound is a familiar honkcaw call above me. I can barely make out two bar-headed geese flying through the pre-dawn sky, loudly announcing the arrival of a new day, or perhaps their arrival in Satpura. The incredible winter migratory birds fly over 20,000 feet through the Himalayas, taking a high, long and windy route just to come and say hello. George Lowe, the Kiwi mountaineer who supported the ascent of Hillary and Norgay in 1953, even claimed to have seen them fly over Everest! Although this claim remains unverified, there is no doubt that the bird takes a surprisingly high path during its migration from Central Asia to India and its (remaining) wetlands.

The silence is again broken by the rustling of the Denwa River as the boatmen make their way to the motorboats that will take us across the river to the Madhai Gate of the Satpura Tiger Reserve (STR). I board a boat and, with a quiet thrill, head out for the morning game drive. At 6:15 a.m. sharp, Madhai’s gate will open and I’ll be ready in my jeep, eager to accept the gifts from the forest.

Among wildlife enthusiasts, Satpura is a sacred name. Uncrowded by tourists even today, the changing topography and rich biodiversity of the jungle here hold a special status among conservationists and naturalists around the world. Spread over 1,427 km² of central forest area and an additional buffer zone of 794 km², it is one of the largest national parks in the country. As we enter the park the topography changes rapidly – wetlands and open grassland with dense foliage with a mixture of local species such as saj, mahua, tendu, lendia, sagwan and kulu, the ghost tree, so called because of the white bark that glows in the dark and looks more like a tall, spooky creature with spindly, twisted fingers.

You continue for a while and the landscape changes again to rolling expanses and then back to rocky slabs which provide exciting leopard sightings. Today, we have the impression of being alone in the park. For such a large park, only 15 jeeps are allowed at a time – and on a typical weekday like today, there are only five or six jeeps inside the forest for the morning game drive. This means there is no noise or dust – and certainly no crowds – at any given time, unlike other more popular national parks like Bandhavgarh or the madhouse, Ranthambhore.

Only a few minutes after morning. I stand still, eyes open, cameras ready – waiting. Each journey is an adventure, a challenge, a kind of game – it’s the game of patience and knowledge. If you are patient and familiar with the forest and the paths the big cats usually take, you may end up spotting the elusive tiger or leopard. Today, we are not so lucky. After waiting a while, we move on, to explore other areas for other things. I hear the coppersmith’s barbet and the racket-tailed drongo.

You never come back from the jungle without a delightful sighting.

As we leave, we learn from another jeep driver that a leopard has been spotted in the exact spot where we had been waiting in the morning. Well, you can wait at one spot just to see a leopard scurry through the bushes – a sighting of a second or less – or you can see other parts and views of the forest. The decision is always yours. I often wonder why I spend all my vacations in an animal park. Waking up at 5am, leaving the lodge in the dark and driving on bumpy roads for five hours in the cold can hardly be called a “vacation”, especially if you get your eyes gouged out by a bear (always lucky, right?), but there’s a thrill to this routine that energizes me like nothing else can.

To compensate for the strict forest routine, I choose a comfortable stay option, so that I can indulge myself the rest of the day. This year was my second time at Forsyth Lodge, the very first lodge opened in STR, and has recently been updated to include a few additional features such as a spa and dining experiences. There are two things I liked about Forsyth Lodge the first time I stayed here. Fortunately, they remain unchanged: the beautiful machan cottages and a variety of local vegetables with meals. Krishna, the lodge chef, has personally trained local farmers to grow vegetables in the most organic way possible. 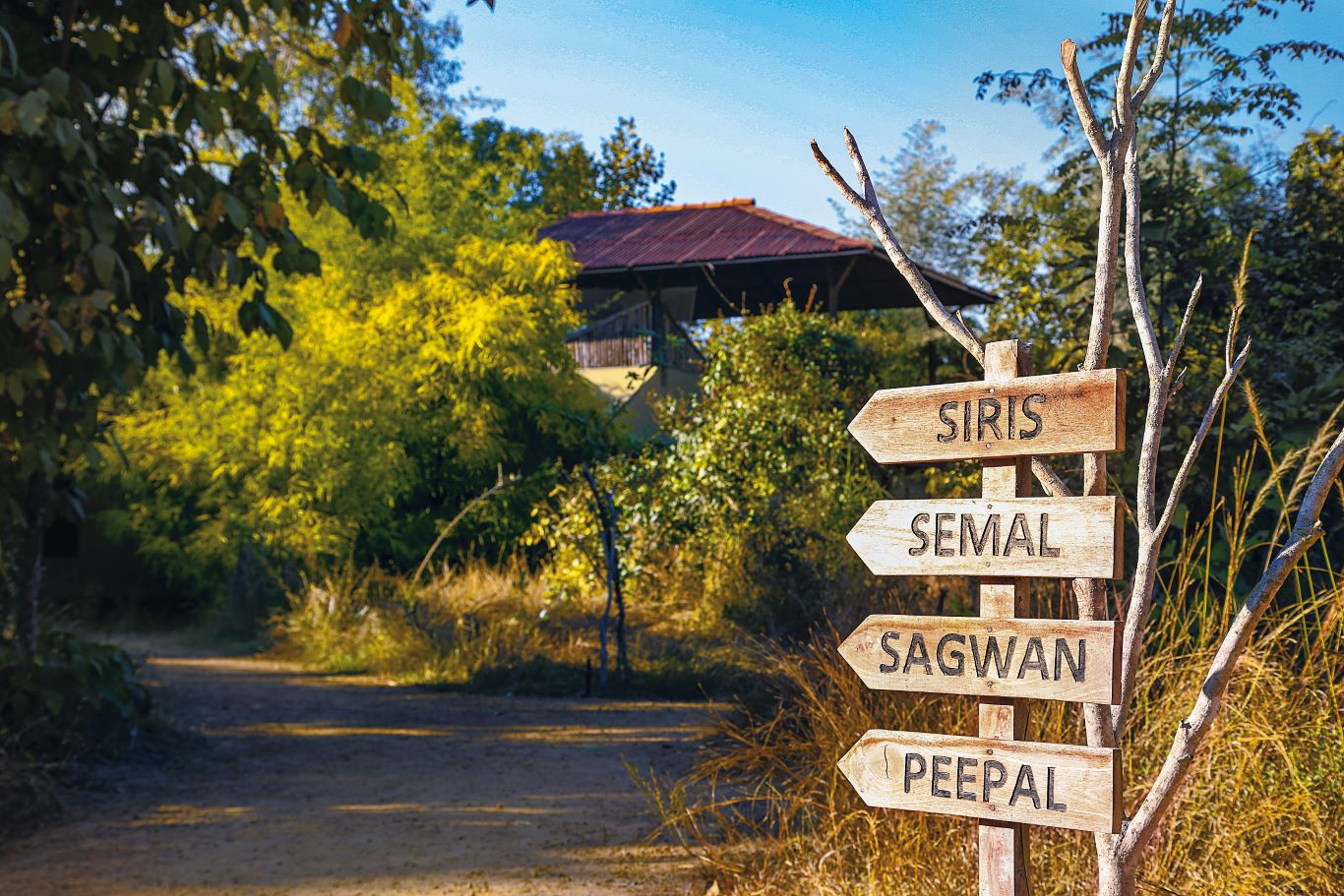 After a late lunch, another adventure awaits – a night game drive inside the buffer zone of the park, where people have regularly spotted a leopard and its cubs. Anyone familiar with Satpura must wonder about the absence of a certain animal in this tale so far. STR can be named a tiger reserve, but until a few years ago you could hardly spot tigers here. This was sloth bear territory and the iconic sightings at Satpura have always been of the large, cuddly creatures you never want to encounter on foot. Between January 2019 and now in my three trips to STR there have been fewer and fewer bear sightings – although still very much present, the current theory is that an increase in the tiger population reduced or scared bears.

These are only theories, however, and one can never accurately predict the behavior of animals in the wild. But, for now, there is no doubt that there are more sightings of tigers and leopards than sloth bears in Satpura. I’m still hopeful as we depart from Forsyth for Parsapani, the buffer zone, for the night game drive. In less than an hour, it is dark and every sound is accentuated, every moment frightening. We crawl along the forest as quietly as possible – car headlights being the only break in total darkness. There are at least seven layers of stars above me and I am breathing deeply. Just getting away from Delhi’s air pollution heals me, but now sitting in the cold of the night listening to the sounds of silence is slowly rekindling my battered soul too… what a year we all had. 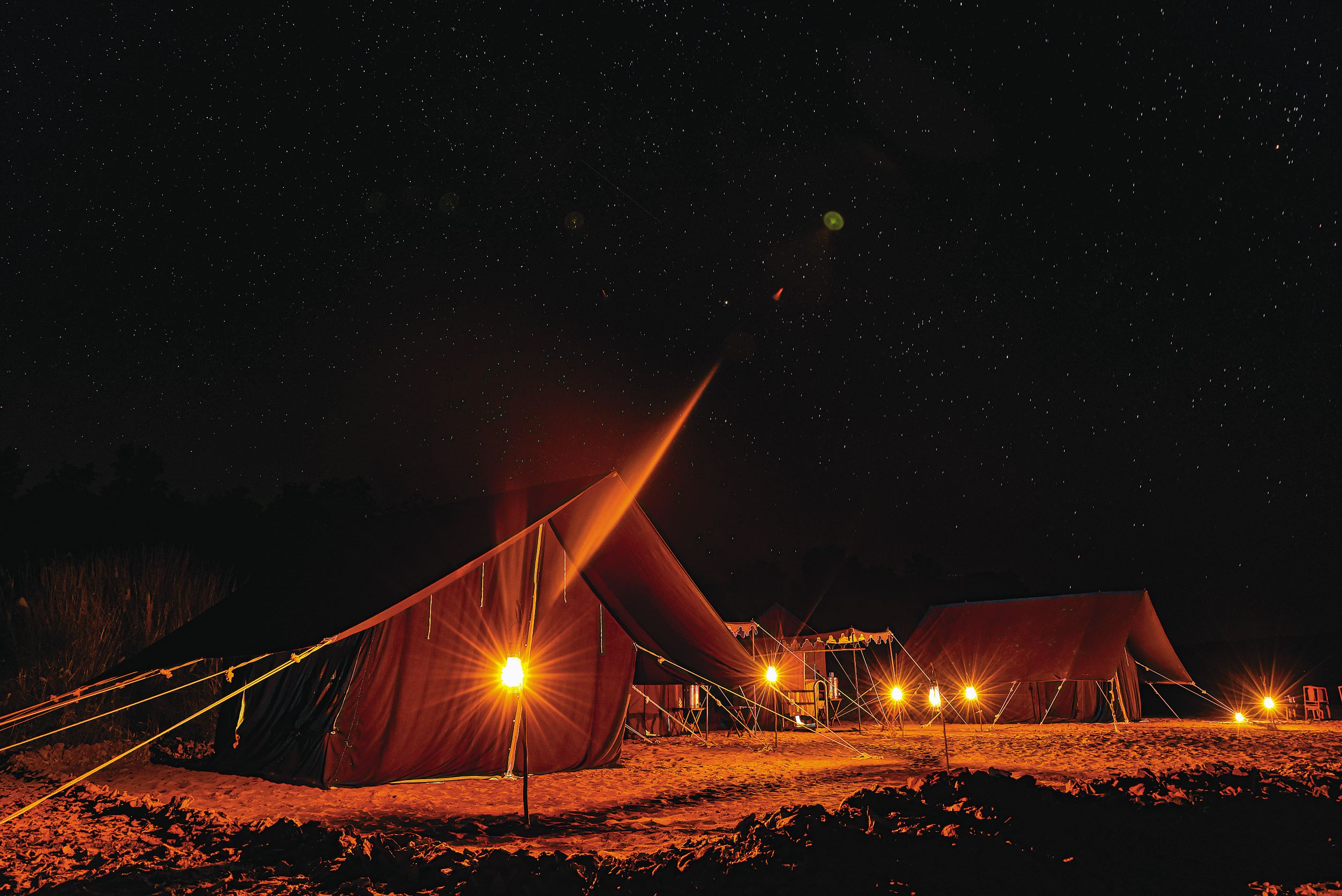 You only realize how much you needed a break when you take one. The night game drive isn’t really about spotting animals, although there have been regular sightings in Parsapani recently. I’m not disappointed with my one sighting of an Indian hare – curious and cute, quickly jumping away from the light of our jeep. Only 20% of the central jungle area is open to tourists and only 10% of Forsyth Lodge’s 44 acres are built on (with 11 cabins). Thus, the journey from the entrance of the property to the main gate is very much like a night safari. One of the best things about staying at a jungle lodge is that you meet like-minded people and it’s never crowded (unless you’re traveling at the end of the year). At dinner, I meet a nice couple from Bhopal, half of whom have never been on a safari. 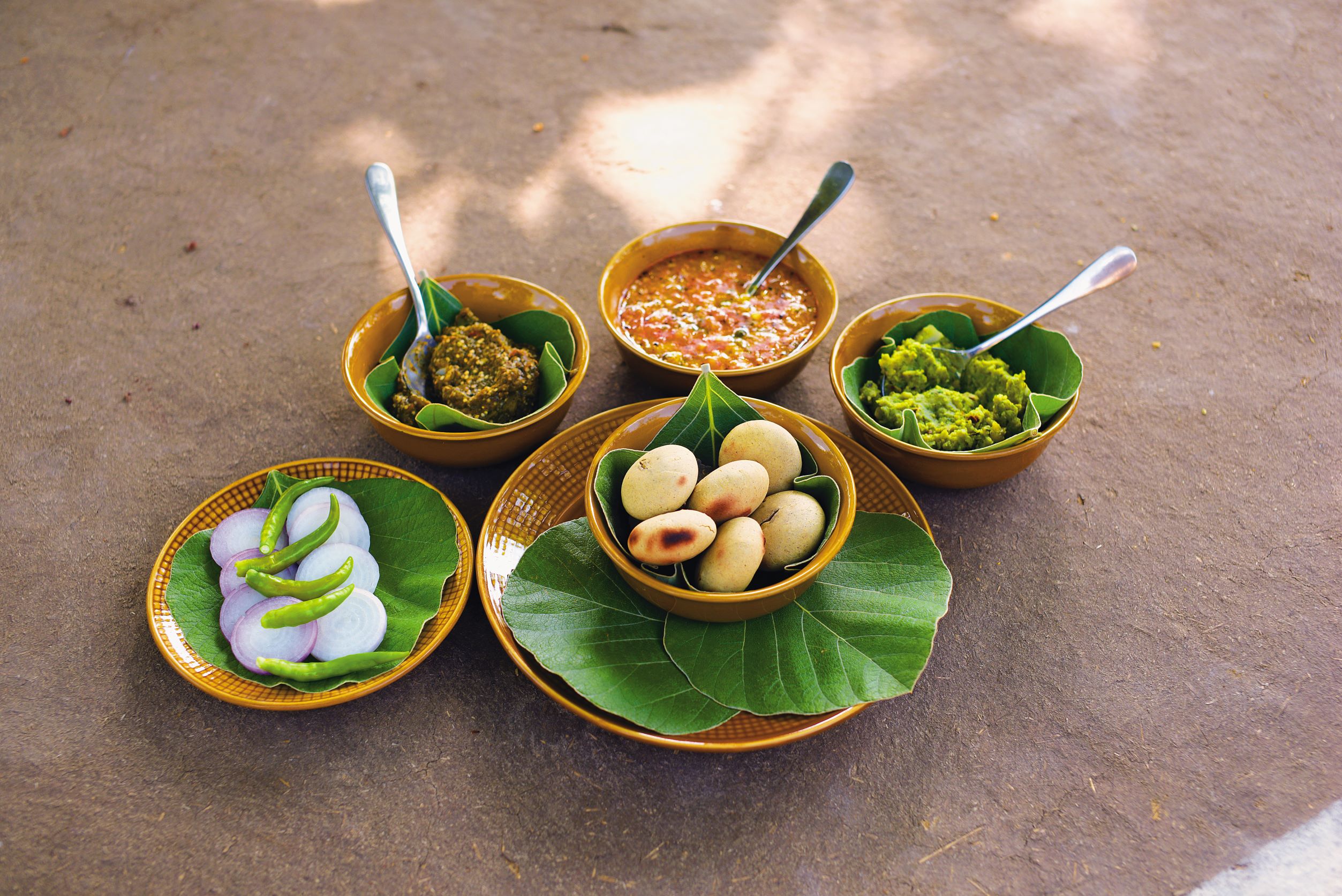 I’m so excited for her – it’s like starting a whole new exciting series with endless seasons. I know she will be hooked for life. Dining at Forsyth Lodge offers different experiences – one day it’s on the terrace, another day with mashals (torches) in the courtyard. Lunch is usually a thali with five or six vegetables, but once we were treated to a “village themed lunch” where local women cooked us fresh baatis (dumplings), which we had with dal and ghee.

There are many experiences to be had in Satpura. Besides the morning, afternoon and night game drives, you can go on canoe safaris, where you can observe many resident and migratory birds, including rare species like the black-bellied tern, for more two hours. You can also opt for a walking safari (hoping you don’t see any bears) or just go boating on the Denwa – who knows what you’ll see on the banks? I opt for the more conventional afternoon game drive on my last day, as I want to stay in the park as long as possible.

The sun is setting over the Denwa when I return – ready to relax for the night. The dinner is in the open air, under the mahua, where I find the nice couple. They saw a tiger – killing! Talk about beginner’s luck. They show me photos and videos – and again, I remember why I get up at 5am and leave for the jungle. You can never tire of the thrill, the possibilities of a jungle. Sleeping is good, but the tiger is better.