And there was no celeb slowing down, as the boys’ team was thrown into the deep end for a whitewater rafting challenge – while the girls cheered them on from the sidelines.

Competitors Wes Nelson and Max George looked like they were having fun during the Canoe Slalom challenge – while Coronation Street’s Colson Smith caused a stir by appearing to fall from his boat.

Challenge on: Wes Nelson, Max George and others caused a stir at Monday night’s Games in a whitewater rafting challenge as the girls’ team watched 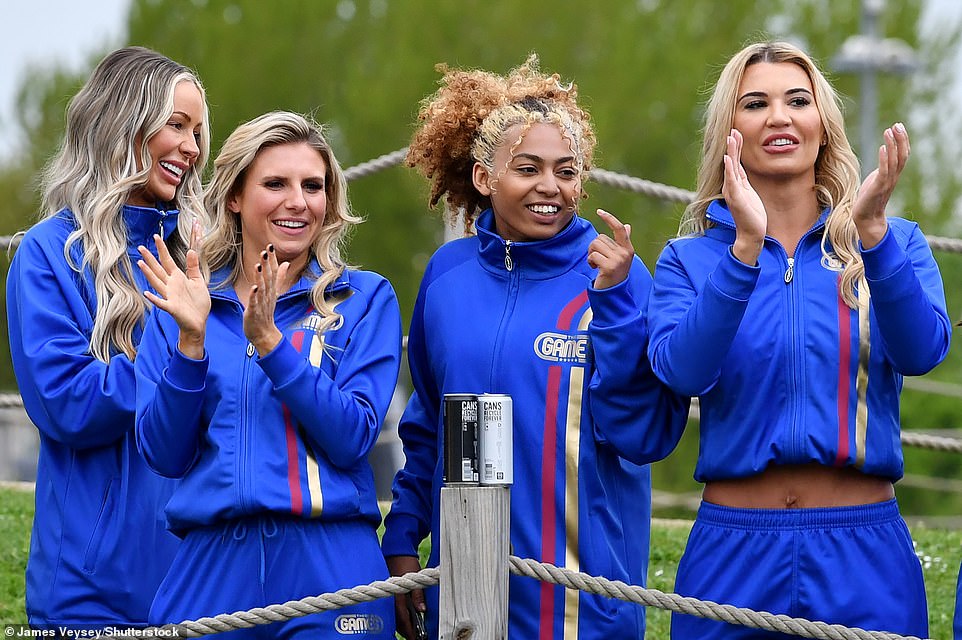 Support: The women’s squad, which includes Olivia Attwood, Phoenix Brown, Christine McGuinness and reserve Chloe Burrows, were cheered on from the touchline

Kevin Clifton looked set to fight the challenge as he gave it his all – before lifting his paddle with a victorious smile.

In a sweet moment, Ryan Thomas embraced a tired Max after the challenge, grabbing his face before kissing The Wanted singer on the head.

The boys’ team were cheered on by the girls, who stood on the sidelines in blue tracksuits with The Games branding. 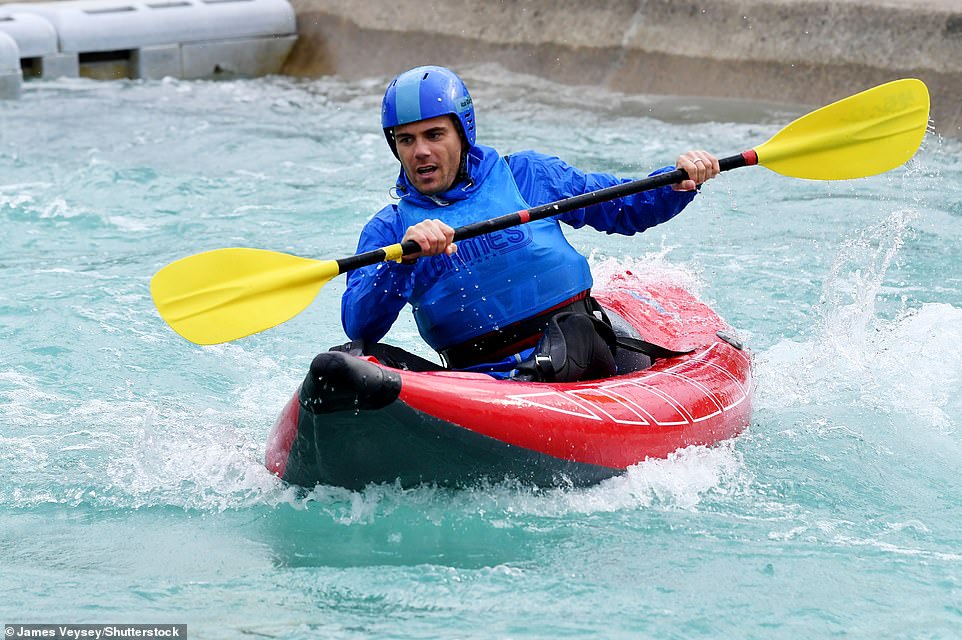 Game face: Max George was in the zone for his water raft attempt 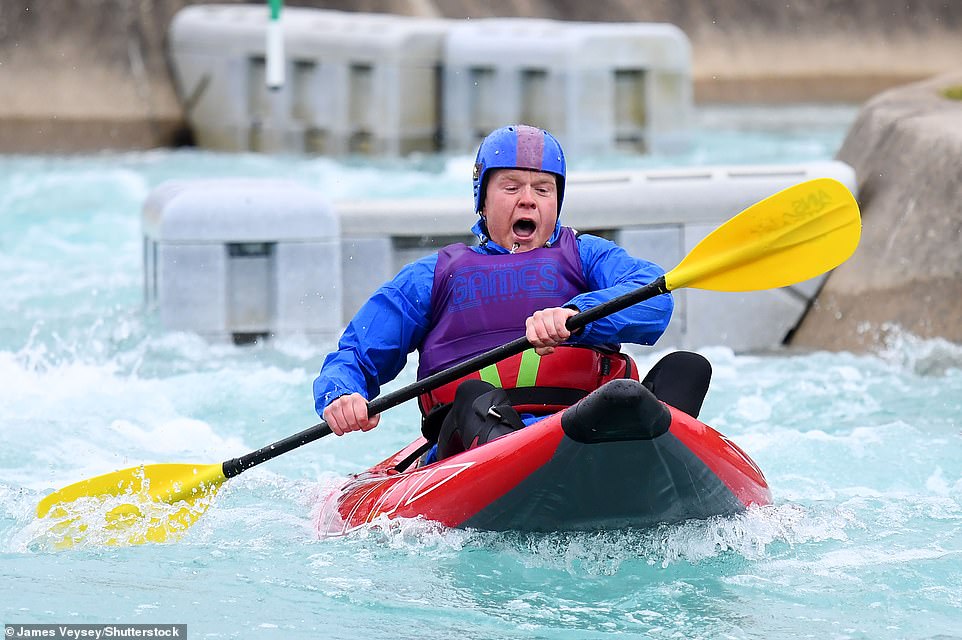 Tough: While Coronation Street’s Colson Smith has the physically grueling challenge of his whole 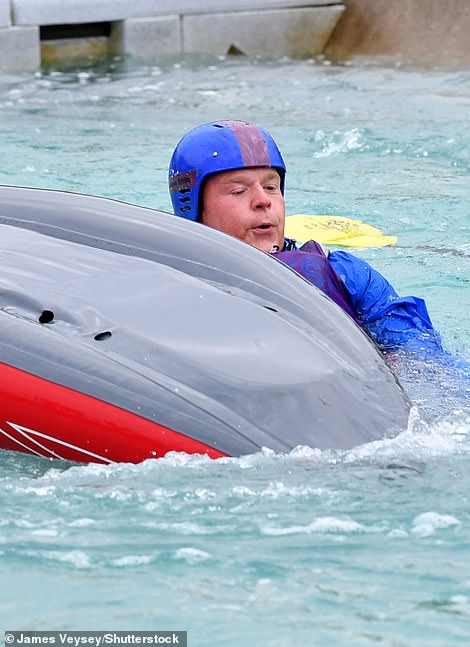 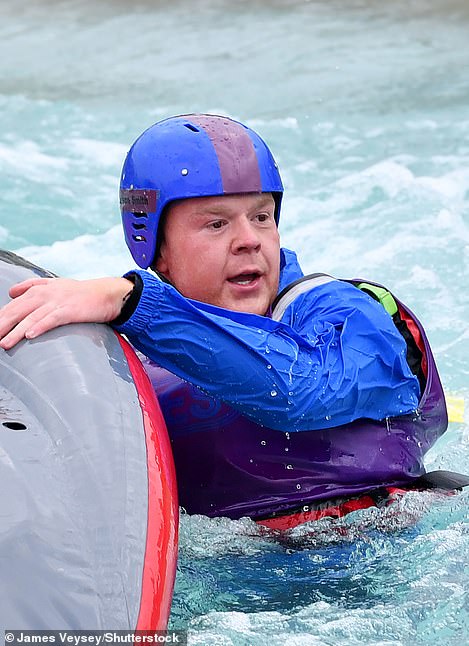 Man down: Colson appeared to have taken a fall as he swam alongside his upside-down boat in a few snaps 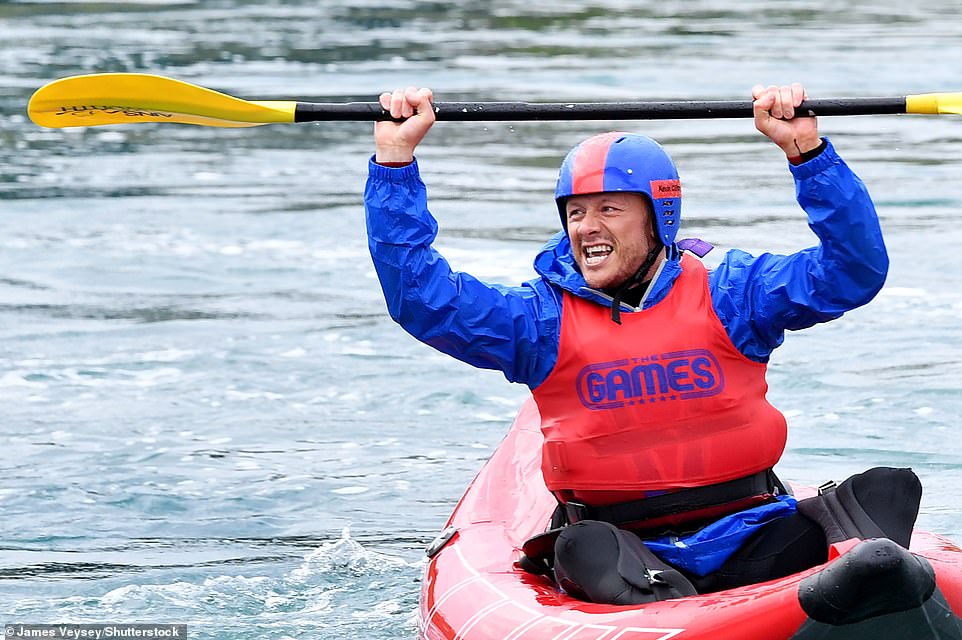 Happy: Kevin Clifton held no prisoners as he raised his paddle with a victorious smile

But while the boys were battling the rough waves, the girls’ team found a moment to pose for a cheeky selfie.

Alex Scott was also on the sidelines, ready to chat with the contestants, as she donned skin-tight black leggings and a high-necked bodysuit to interview the stars. 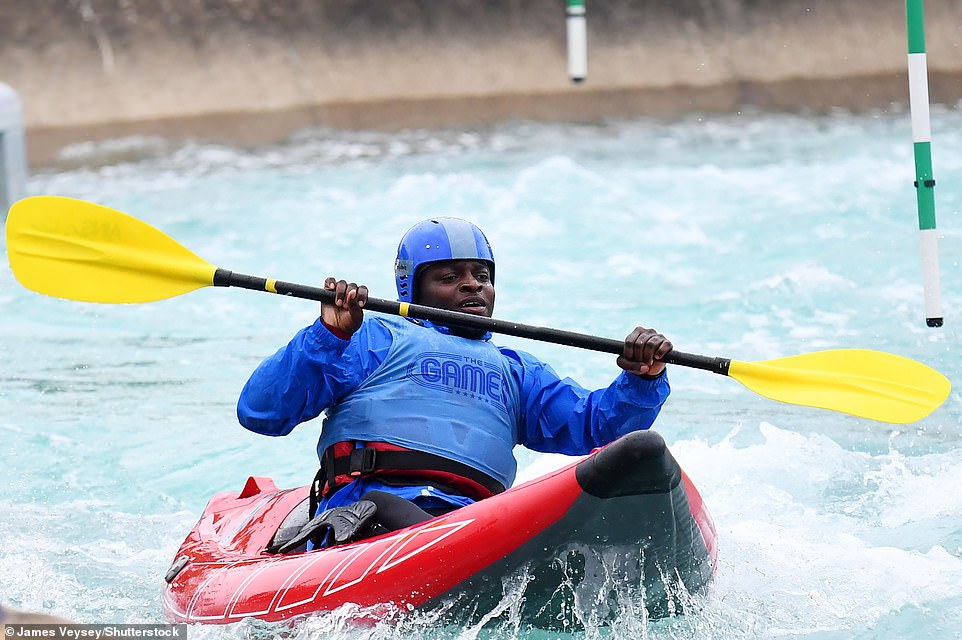 Exhausting: Reserve competitor Will Njobvu looked tired during the challenge 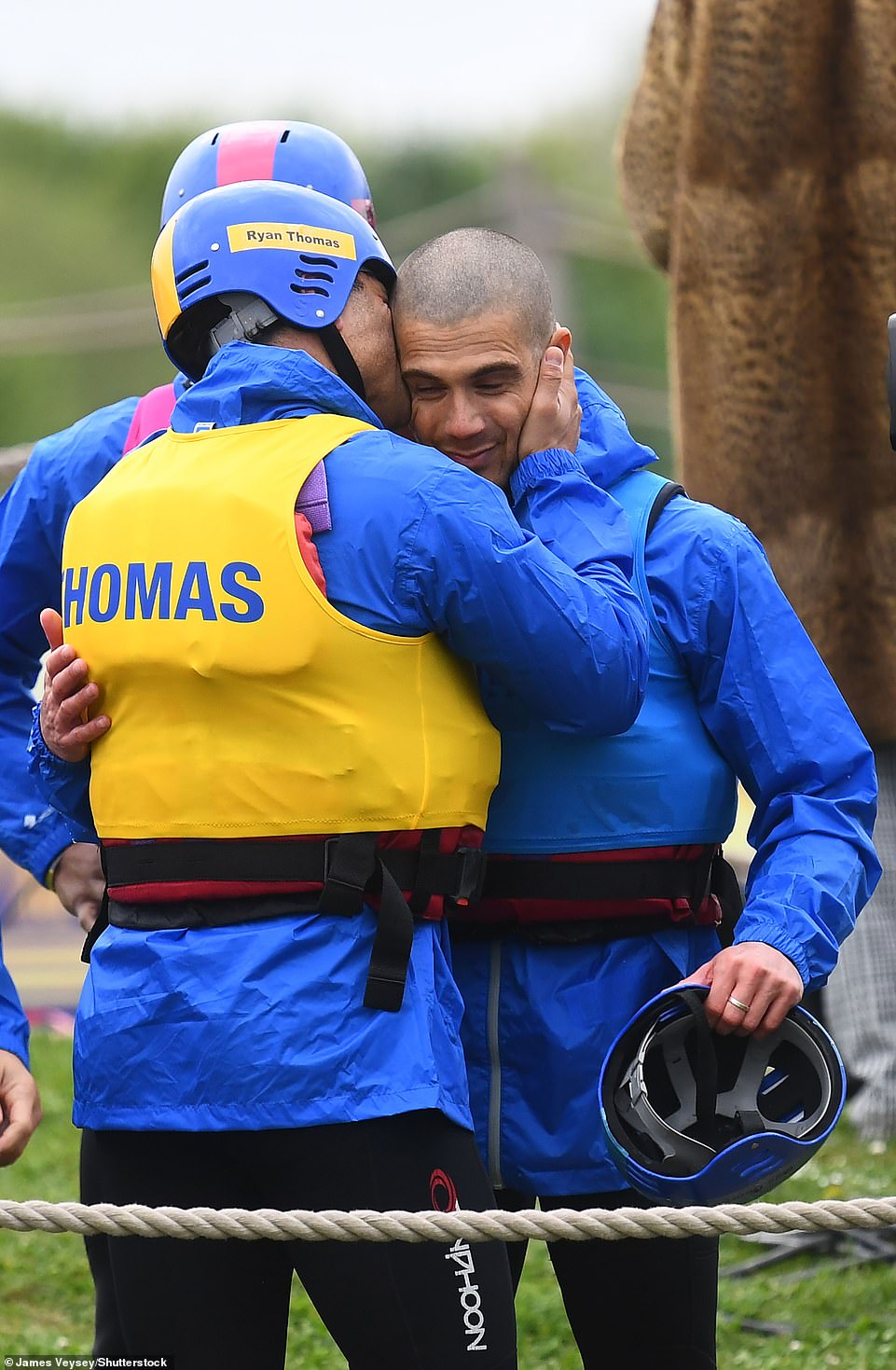 Hugs: In a sweet moment, Ryan Thomas seemingly planted a kiss on Max’s head as the couple enjoyed a hug 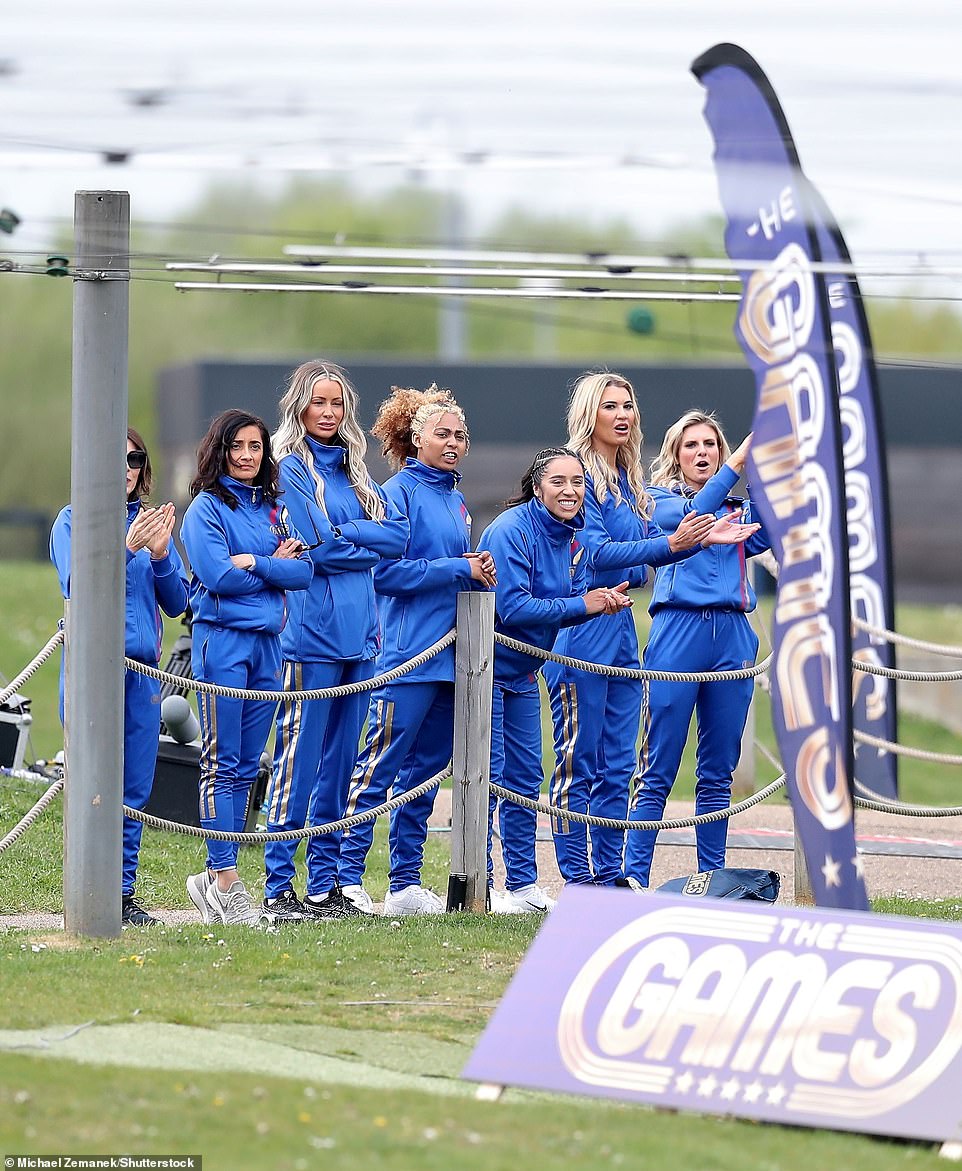 Nippy: Colson and Josh Herdman were on the wet side when they came out of the water after the challenge

The Games will take place every night this week until Friday, April 13, with the 12 competitors competing in a series of challenges.

It comes after weeks of grueling training, which saw the celebrities put through their paces in intense preparation.

All were taken out of their comfort zone to be trained as athletes, swimmers and cyclists, to compete in the hopes of finishing at the top of the medal table and being crowned winners. 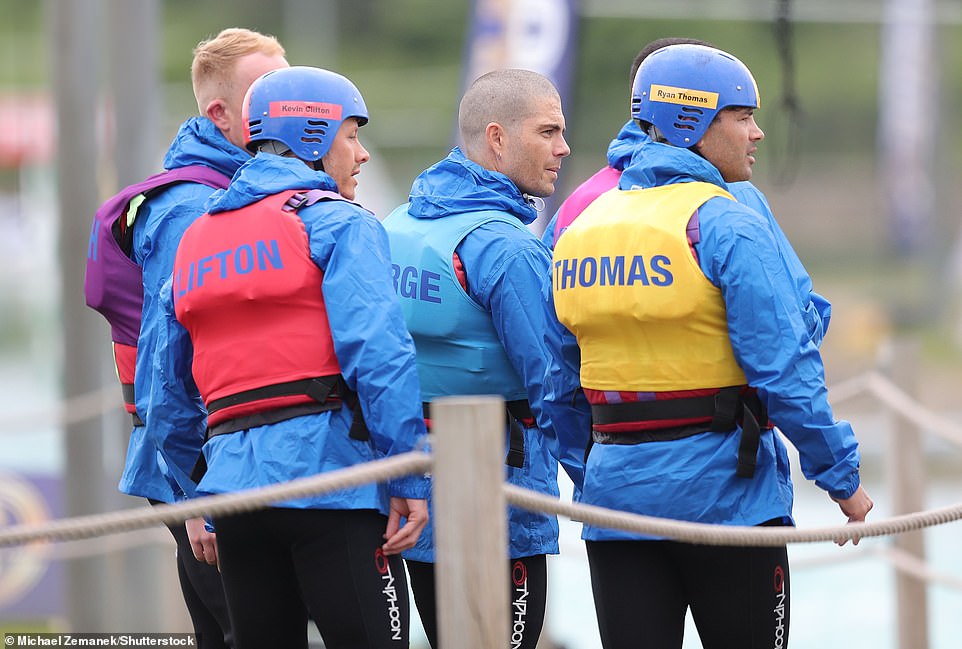 Safety first: the names of the competitors were each printed on the back of their colorful life jackets 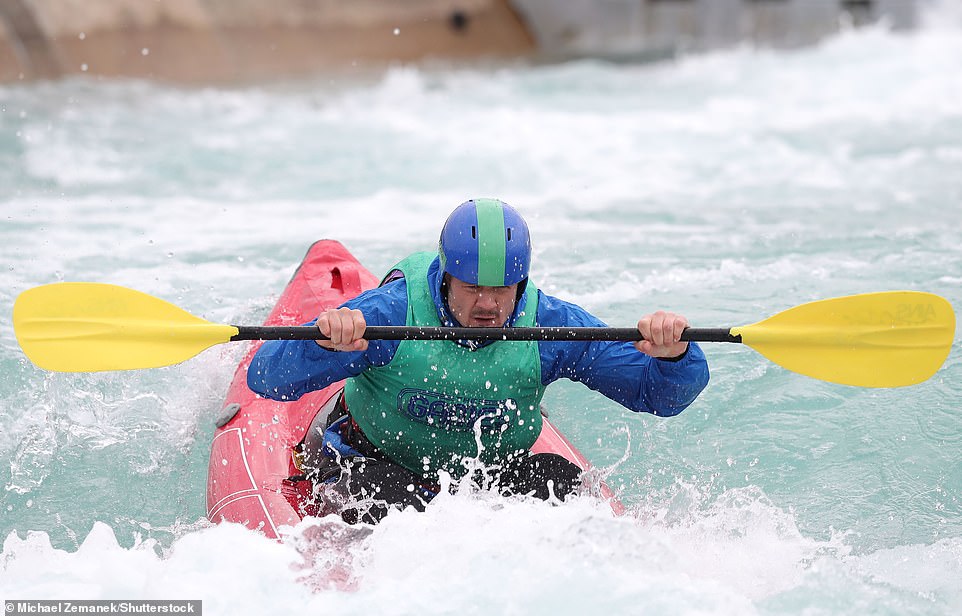 Speed: Josh held a solid position as he rode over a wave 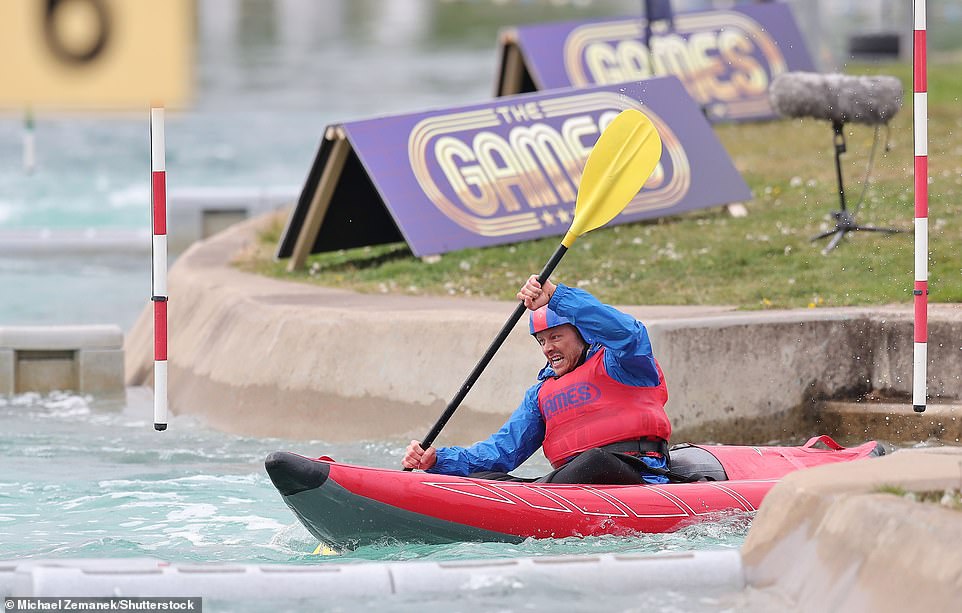 Tough: Kevin used his strength as he struggled with the rocky water

Through sporting challenges, celebrities will rack up points on the medal table as they compete to rise to the top.

As the leaderboard takes shape each night, the series will culminate in an exhilarating final showdown in which a male champion and a female champion will be crowned.

The Games continue Tuesday evening at 9 p.m. on ITV. 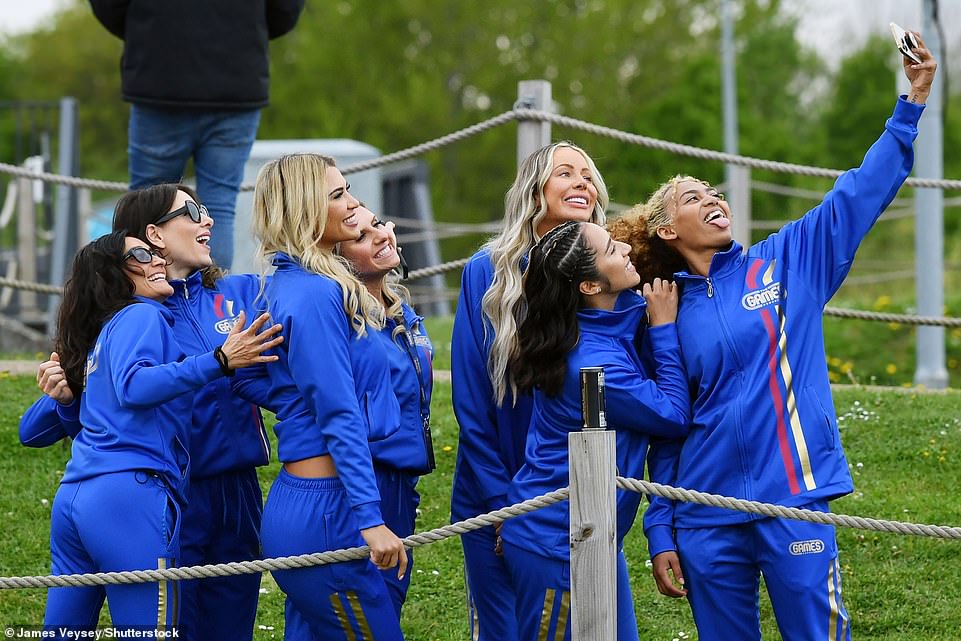 Pose: The girls found a minute to pose for a selfie while the boys competed 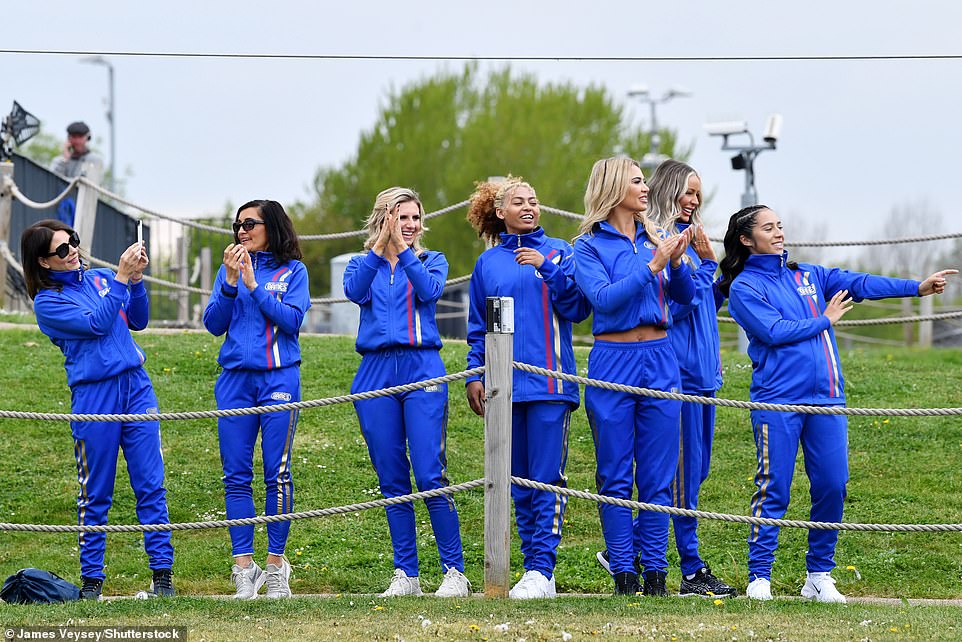 To smile! It was shots all around as they managed to catch some of the boys in the water 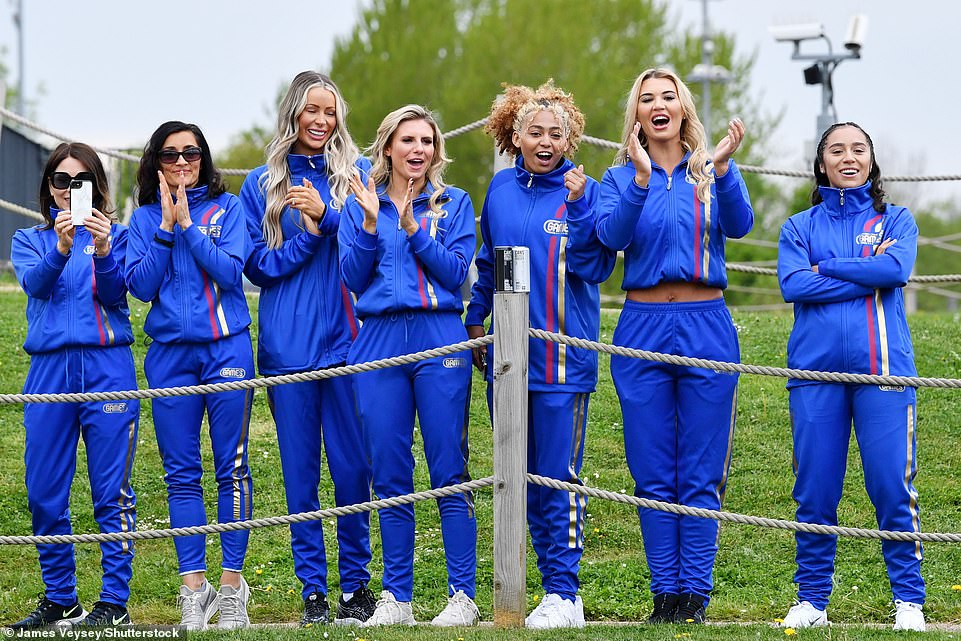 Onlookers: They all cheered Ryan as he smash his way through the waves 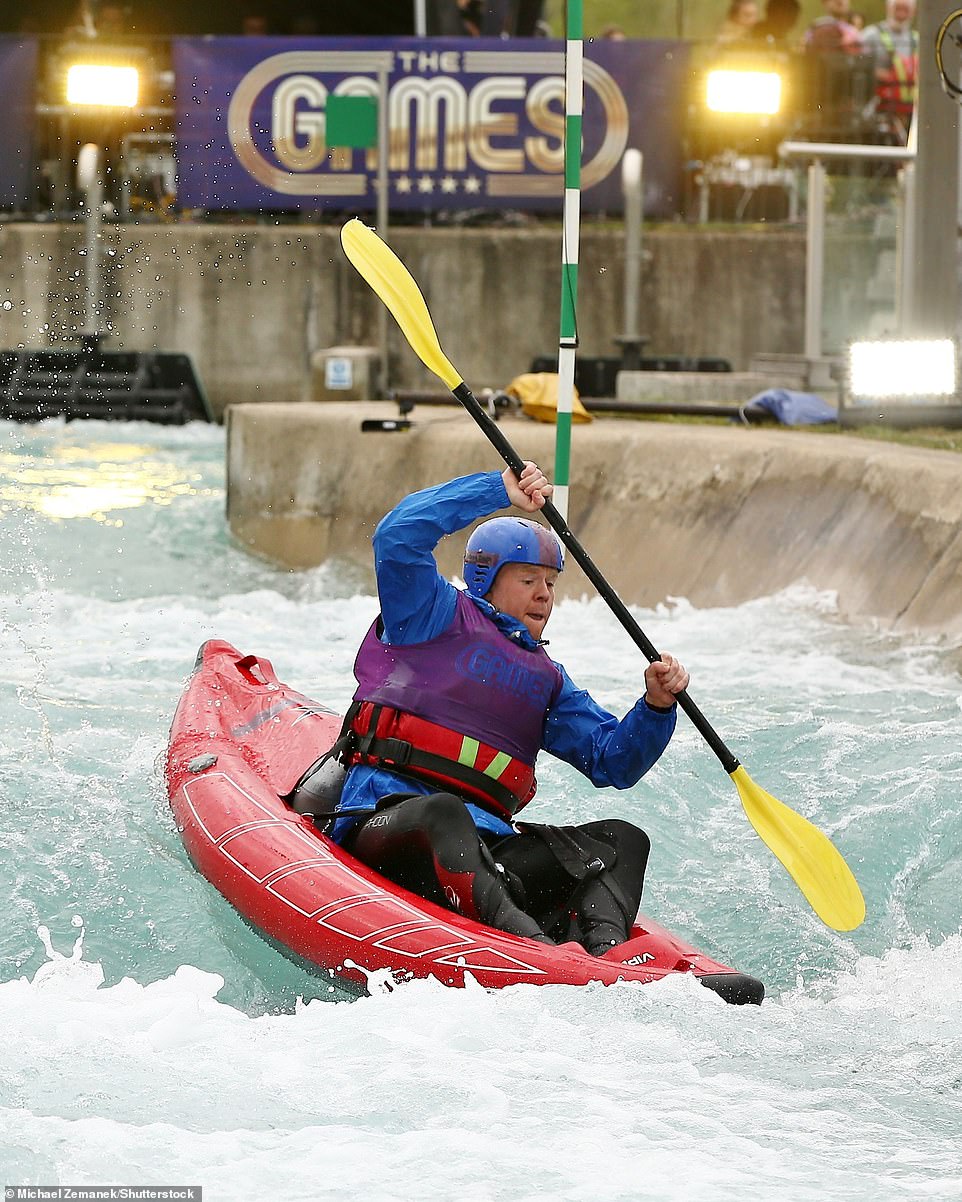 Something different: It’s a far cry from Colson’s day job, as the actor showed off his impressive athletic range 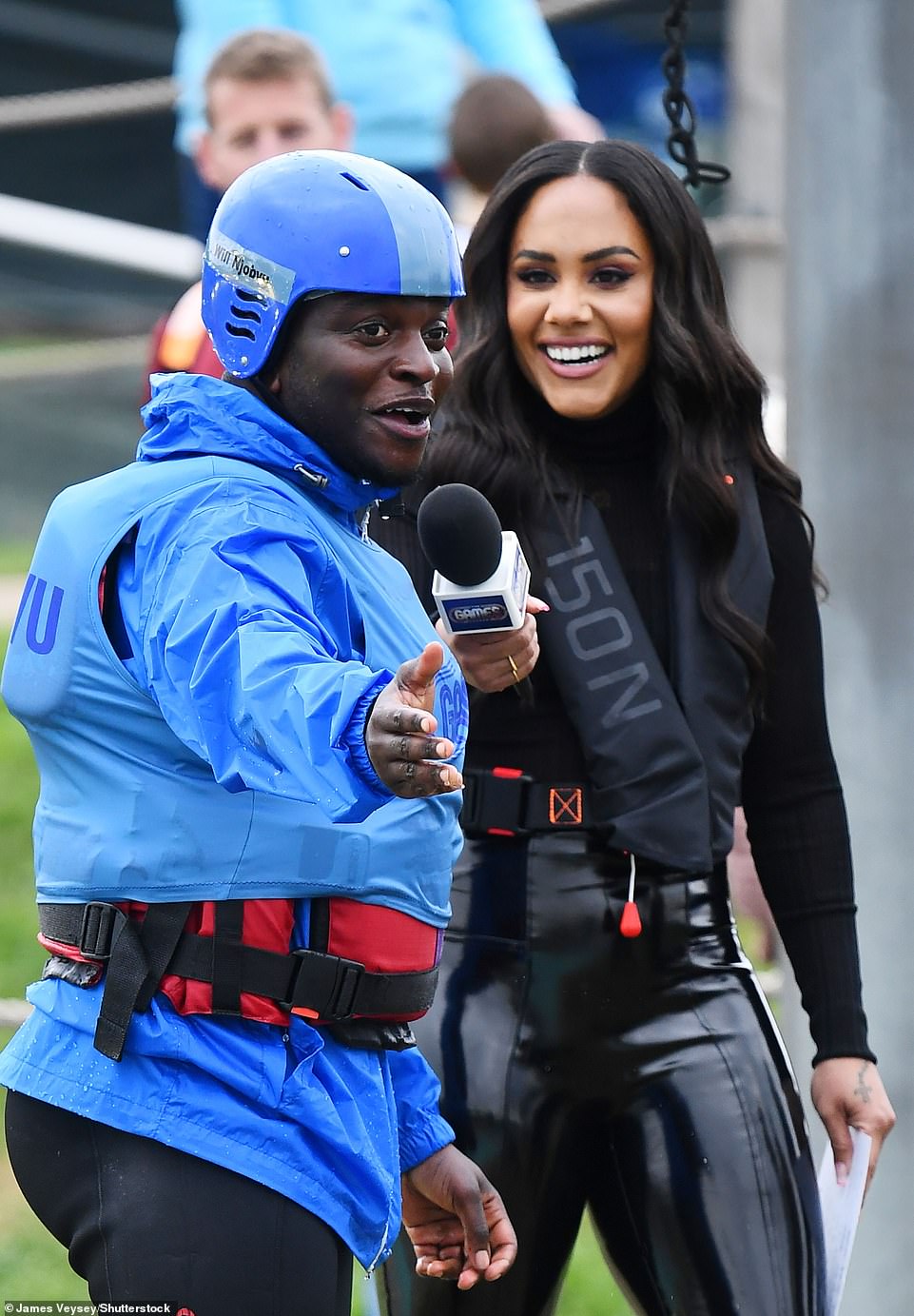 Reporter: Alex Scott was on the sidelines ready to chat with all the candidates afterwards