An international team of archaeologists, anthropologists and marine scientists has just published a landmark article in the Journal of Island and Coastal Archeology which details their research into the social and natural processes that shaped the development of the coastal Maya of the legendary Maya culture.

The Proyecto Costa Escondida (Hidden Coast Project) focuses exclusively on the culture of the Mayan people who lived (and to some extent still live) along the coast of the Caribbean Sea in the northern Yucatan Peninsula. It covers a period that begins around 800 BC and extends to the present day.

For the most part, the scientists involved in this in-depth historical and archaeological study focused their research on the adjacent sites of the ancient Maya port cities of Vista Alegre and Conil. Proyecto Costa Escondida’s investigations of the coastal region of this area have combined traditional archaeological methods with new, innovative techniques to learn more about past climatic and environmental conditions.

“We chose the name for the project because the coast is literally hidden behind the mangroves,” explained Jeffrey Glover, an anthropologist from Georgia State University, in an interview with the GSU Research Magazine . “But at the same time, and more importantly, this area has been hidden from scholarship – there just hadn’t been a lot of work done there until we arrived.”

Vista Alegre is a small island located on the Caribbean side of the Holbox Lagoon, off the town of Chiquila. It would have been a busy port in ancient times, according to researchers from Proyecto Costa Escondida, based on signs of occupation found there. Scientists have discovered about 40 rock platforms that would have been the foundations of pole and thatch buildings. The largest of these platforms is over 13 meters high and would probably have been the site of a temple.

The Conil site is much larger than that of Vista Alegre. It is located just in front of the Holbox Lagoon of Vista Alegre, on the current coast of Yucatan. It was visited by the Spanish conquistadors in the 16th century, and they identified it at that time as a settlement of over 5,000 houses.

During their study of these two sites, the researchers discovered or identified tens of thousands of artifacts, ruins, and animal and plant remains, which revealed valuable information about the ancient coastal Maya culture. Proyecto scientists have also learned a great deal about the evolution of the landscape and coastal ecology over time, through the application of techniques and technologies capable of accurately identifying environmental conditions of the distant past. 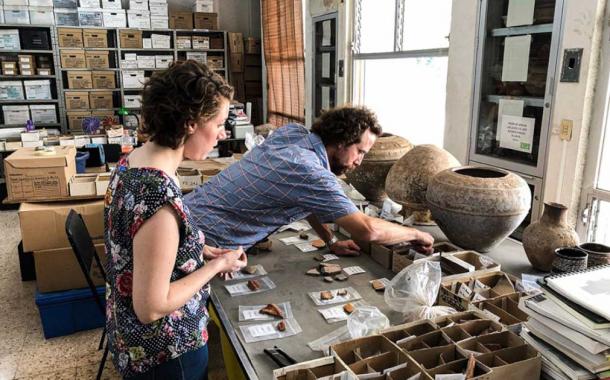 A fascinating line of research has examined how sea levels might have changed in the past and how that might have impacted ancient Maya society. Dr. Patricia Beddows of Northwestern University in Illinois checked baseline sediment samples for their oxygen isotope values, to track changes in sea level and also the likely availability of fresh water. It is believed that sea level rise in ancient times would have flooded fresh water sources and therefore limited the availability of drinking water.

To confirm this theory, the team deployed a drone equipped with a thermal camera to fly over coastal areas and search for places that may have served as sources of fresh water in the past (groundwater seeping from springs now submerged would be colder than the surrounding seawater). The data obtained still needs to be studied further, but there is no doubt that the coastal Maya experienced notable changes in sea level over the centuries. 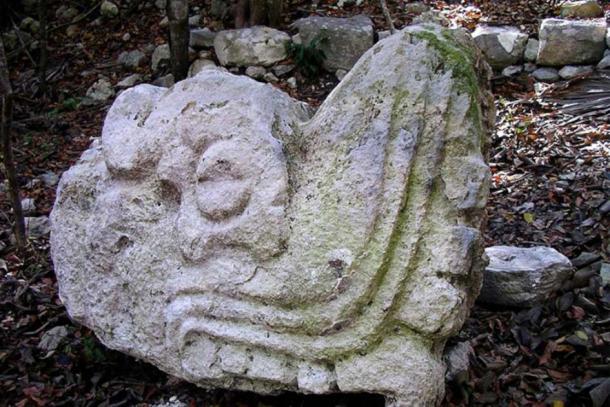 This sculpted serpent’s head is what first drew the team to Vista Alegre. It would have been part of a pair that market either side of the stairs leading to a main pyramid structure at the site. ( Costa Escondida Project )

What marine life analysis can tell us about the coastal Maya

Another interesting line of research has focused on the remains of marine life found in basal sediment samples. Drs. Beverly Goodman-Tchernov and Roy Jaijel of the University of Haifa in Israel have discovered that carrot samples linked to antiquity contain the remains of tiny sea creatures called foraminifera which, depending on their type, can only survive in specific environments. .

Of particular interest were the types of foraminifera found near Vista Alegre, as these creatures could not have survived in the area if the coastal waters were the same as they are today. It would seem that instead of being hidden in the mangroves as it is today, 2,500 years ago, Vista Alegre would have been homeless and easier for sailors to spot. It would have attracted traders in their canoes, who could have seen that it was a bustling port. 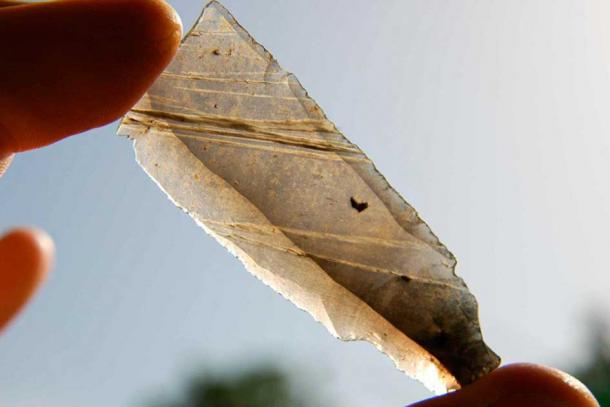 This obsidian volcanic glass slide found at Vista Alegre has provided researchers with valuable clues to coastal Maya trading networks. This obsidian originally came from the highlands of Guatemala, while others came from as far away as central Mexico. ( Costa Escondida Project )

Bustling Malls of the Mayan Coast

While the researchers focused heavily on learning about the ancient coastal environment, they also relied on conventional archaeological approaches to uncover an impressive cache of Mayan artifacts. So far they have unearthed thousands of pieces of pottery and hundreds of pieces of obsidian, a volcanic glass used to make tools. They also found many spindle whorls, which were used to create cotton thread that could be used to make clothing or fishing nets.

What is remarkable is that this collection of artifacts is more diverse than what has been discovered at inland archaeological sites. This shows that the colonies of Vista Alegre and Conil were in fact commercial centers, where it was possible to obtain a wide range of goods brought by sea. Trade networks linked by canoeing and overland travel would have helped integrate the Maya Empire more fully, bringing a diverse range of items to active ports wherever they were.

These trading networks appear to have reached their most extensive and complex stage around 1,000 years ago. At this time, Chichen Itza, a Mayan city located on the Yucatan Peninsula about 160 kilometers inland from Vista Alegra and Conil, became a major religious, political, and economic center.

Its rise in power meant that a greater volume of goods would arrive in the Yucatan, affecting locations both inland and on the coast. “Strong evidence for this realignment comes from obsidian data, which reveals greater connections to parts of central Mexico near modern Mexico City,” Dr. Glover said.

Archaeologists have unearthed a treasure trove of artifacts so far. But there is one thing they were looking for that proved elusive. “We’d love to find an intact ancient Mayan trading canoe!” exclaimed Dr. Dominique Rissolo, an archaeologist from the University of California at San Diego who worked closely with Dr. Glover. “It is possible that such a ship is preserved under the muddy bottom of the bays surrounding Vista Alegre. We would learn so much about these legendary watercraft.

Along with the artifacts, the researchers also unearthed a staggering number of animal bones, possibly over 20,000 in all. This included the bones of sea creatures like rays, sharks, turtles and marine gastropods, which would likely have been used as food sources. 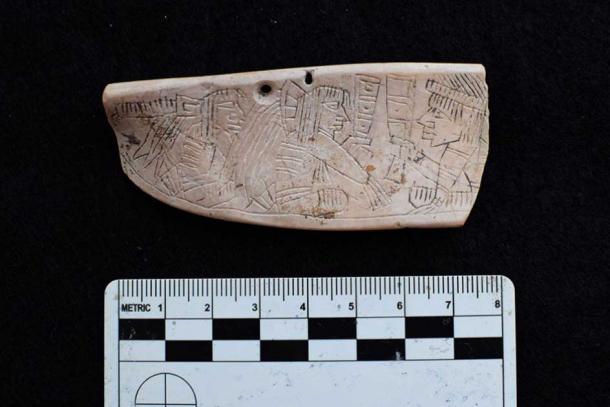 How the Mayans Survived

There is a common understanding that ancient Maya society disappeared overnight, following some type of catastrophic event or circumstance that forced the survivors into exile. But the best evidence now suggests no such disaster has ever been experienced. The Maya kingdoms didn’t collapse so much between AD 800 and 900, but they slowly broke apart, resulting in population movements that weren’t as sudden and dramatic as is often believed.

The descendants of the ancient Maya are still alive today, living in Yucatan, Guatemala and Belize. “I think it’s a story, not of a sudden or massive exodus, but of a change over time,” Dr Glover said. “To understand these changes, we need to understand the complex interplay of environmental and cultural factors, which our research reveals.”

Scientists from Proyecto Costa Escondida studied in more depth how the coastal Maya adapted to environmental changes. It is believed that they did so cooperatively and with the aim of finding collective solutions.

“Our research gives us insight into the common challenges that coastal peoples faced – rising sea levels, diminishing freshwater, changing economic and political systems – and they likely built on each other” , explained Glover. “In a way, I think it would have been easier to jump in your canoe and paddle along the coast for help than to walk on land.”

The Proyecto Costa Escondida was interrupted by the global pandemic, but is now fully operational again. The end of this ambitious project is nowhere in sight, as researchers studying ancient Maya coastal society still have many unexplored avenues of research to pursue.

Top image: Research at the Vista Alegre site has revealed that it was once a bustling port used by the Coastal Maya. Source: lunamarina /Adobe Stock